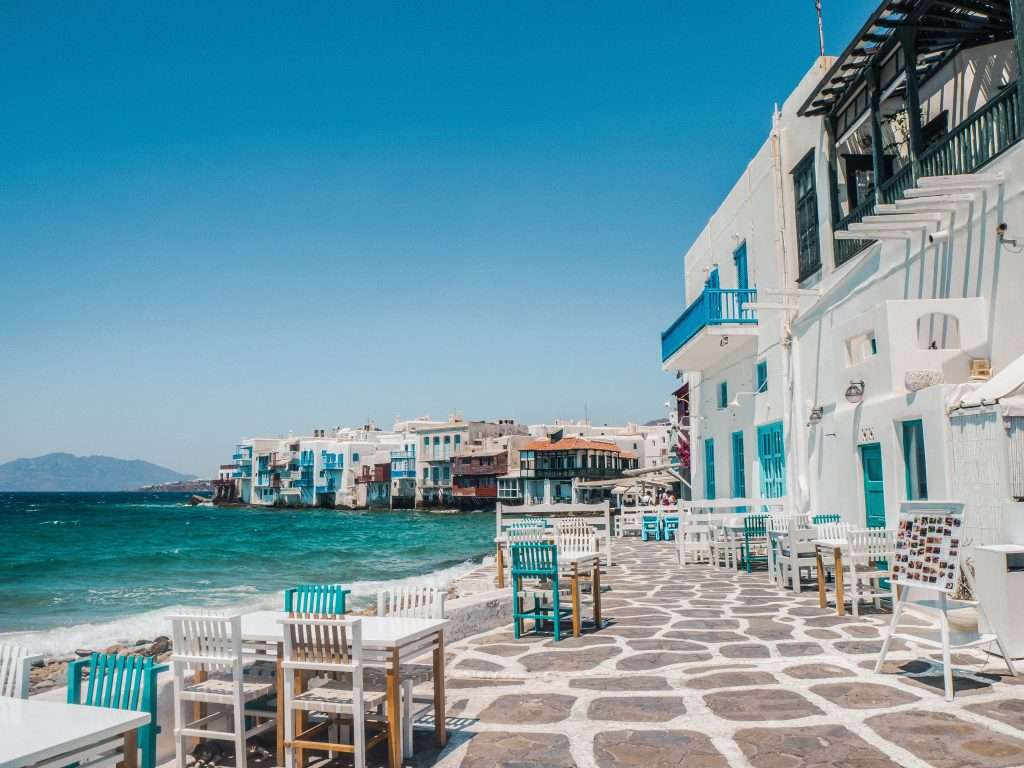 When planning your honeymoon, the options may seem endless, especially if you have no idea what part of the world to consider first. While a capital city destination like Paris or Rome is fantastic, adventurous couples might go for the beaches and mythology of a Greek island, Spain’s touch of class or Norway’s rugged landscape. Though still a hugely popular choice for thousands of foreign travelers, all three countries offer original itineraries that guide you slightly off the beaten path. Your post-wedding euphoria should be all about exploring at your own pace, and the following recommendations will hone on what makes a perfect honeymoon in each of these three destinations.

If Spain was one of the potential destinations on your list, you might be wavering between Barcelona and Madrid, wondering which city will strike a better balance between sightseeing and letting loose. If that’s the case, consider Seville, the southwestern city that doubles as the capital of the Andalusia region. Known for its distinct Moorish, Islamic and Gothic architecture, the city’s labyrinths of streets and alleys transports pedestrians back in time, all while overlooking the River Guadalquivir.

The city is especially stunning at golden hour, when its regal archways, towering spires and ornate balconies are awash in a warm glow. Seville is also home to the roots of Spain’s flamenco movement, so be sure to set aside an evening and catch a show. Performances roll drama, theatre, impeccable choreography and storytelling all into one action-packed night.

Where to stay in Seville

Seville has no shortage of luxury hotels to choose from, including Hotel Boutique Casa del Poeta, El Rey Moro Hotel, and Hotel Casa Imperial. Providing easy access to Seville’s attractions as well as just enough privacy, each hotel comes with state of the art amenities and unique touches celebrating Andalusian culture and aesthetic.

Once you’ve settled into your honeymoon suite and are ready to get moving, notable landmarks include the Alcazar and The Seville Cathedral’s La Giralda tower, which face each other across a plaza in the center of the city. Built as a mosque in 1198, the existing cathedral was completed in the 16th century and still retains some of the architectural characteristics of its Islamic origin.

The La Giralda bell tower is one of the defining features of the Seville cityscape, and visitors can make the trek to the top of the tower via a series of ramps. Views of the sprawling city await, as well as a unique perspective on the exterior of the cathedral itself. Heading west from the cathedral, walk over to Barrio de Santa Cruz, a formerly Jewish part of the city and currently its most popular neighborhood. You can spend the better part of the day ducking into small shops, snacking on traditional tapas, and imagining Spain’s bygone eras while strolling the Barrio.

While the rest of your trip will undoubtedly be devoted to sights like the city’s palaces, the Toro de Oro watchtower, and the Mercado de Triana, Seville also makes a convenient headquarters for discovering what sets Andalucia apart from the rest of the Iberian peninsula. Located in the city of Granada, Alhambra Palace is not to be missed; adjacent to a lush grove that was planted by its former inhabitants, this royal Moorish fortress dates back to the 14th century. It is one of Andalusia’s best known attractions and stands in stoic homage to the region’s turbulent history.

The easiest way to reach Granada from Seville is by car, but regular train service between the two cities is available as well. And for the active, there are bicycle tours available; alternatively, the train ride takes about three hours one way. If you want to keep exploring Granada’s historic sites and lauded tapas scene, spend a few days in the city after visiting Seville for an extended Spanish getaway.

Wrapping up the perfect honeymoon

To end your honeymoon on a bright note, head from Seville to the seaside city of Cadiz, located on a peninsula extending into a bay of the same name. A baroque cathedral, historic watchtowers and balmy beaches have made this harbor both a local and international destination, and it is widely considered to hold the title of Western Europe’s oldest city. Its residents date back to ancient Phoencians, and the city’s former glory is reflected in its monuments. Today, the town invites beachgoers and history buffs alike, making it an ideal place to wind down after seeing all Seville has to offer. The train ride from Seville to the coast takes between an hour and a half and two hours.

For all the architectural charm of coastal Italy or France these are incredibly busy, so perhaps consider spending your honeymoon on Greece’s Mykonos Island. While some of the island’s beaches are internationally known for their summer nightlife scene, honeymooners can also find plenty of peace and quiet across the city; unless pulling all-nighters on the beach is your thing!

Where to stay in Mykonos

The NOMAD Mykonos, Kensho Ornos and Saint John Hotel Villas & Spa are among the many hotels and guesthouses in Mykonos that blend contemporary sophistication with old- fashioned Mediterranean charm. While you’ll likely want to look at lodging near Mykonos town first, consider branching out to hotels across the island.

You’ll want to start your first full day in Mykonos by exploring the neighborhood of Little Venice, which hovers over the Aegean sea. Undoubtedly photogenic, the district’s streets are lined with whitewashed homes, with many featuring an artisan shop, local eatery or small cafe on the ground floor. Reflecting each sunrise and sunset, the homes match the island’s famous white windmills, which date back to the 16th century and stand guard over the sea. As you wrap up your walking tour of Little Venice, stop at any of the small restaurants lining the shoreline for a seafood dinner by candlelight, a locally sourced glass of wine and baklava for dessert.

If stunning houses of worship tend to take your breath away, you’ll want to pay a visit to the island’s most beautiful church and monastery. The domed Monastery of Panagia Tourliani, located in Ano Mera village, features a carefully crafted interior and on-site museum. Small but quaint, the museum holds the first bells that rang out from the monastery, along with various handicrafts and religious items.

Scheduling an organized tour with a local service is the best way to understand the role of the monastery within the island’s community, and get to know Ano Mera, which is often overshadowed by more touristic districts. On your way back to the beach, drop by the Church of Panagia Paraportiani, which dates back to the 17th century. A whitewashed structure, the church stands as if carved from stone, making it a beautiful architectural backdrop for any photo. Though located a few miles outside of town the Armenistis Lighthouse is similarly unforgettable, especially when the light is just right at sunrise or sunset.

One special characteristic of Greece’s Cyclades islands is the relative ease with which you can travel from one island to another. Local ferries and organized tours are your ticket to exploring Mykonos’ neighbors. The island of Delos is one of the most popular choices among day trippers, who are especially drawn to its significance in Greek mythology. An archaeological site and museum hold many of the Cyclades’ secrets, allowing visitors one of a kind access to an evolving archive of ancient history. Delos is also home to Roman ruins, the famous Avenue of Lions replicas and beaches that often see less crowds than those of Mykonos.

For a total change of pace from Greece or Spain’s sunny cobblestone streets, consider planning your honeymoon around Norway’s capital- and the natural wonders that surround it. Teeming with Viking history, fjord photo ops and Nordic hospitality, Oslo will have you on your toes and on the move every step of the way.

Combining your time in the nation’s capital with a few days in the city of Bergen will introduce you to two sides of Norway’s rugged waterfront landscape- and its two largest urban areas as well. Both have strong ties to their incredible natural surroundings, and you can find yourself surrounded by slopes, wildlife and sparkling waters just a short trip from each city center.

Where to stay in Oslo

For elegant, classic lodging, consider staying at Oslo’s Hotel Bristol or Grand Hotel. In Bergen, look into the Thon Hotel Rosenkrantz or Bergen Bors Hotel, which is housed in a historic stock exchange building. You can travel between Oslo and Bergen via the Bergen Railway; the trip does take nearly seven hours, but it is internationally renowned as a notably beautiful ride. It is also Europe’s highest rail line. Quick flights between the two cities are available regularly as well.

Ideas of what to visit

When in Oslo, the City and Kon-Tiki Museums are no-brainers, especially if you want a fascinating introduction to Norway’s seafaring history. Both museums are sure to get you in the maritime spirit, especially if touring the fjords is an essential part of your itinerary. Downtown Oslo’s Cathedral, Akershus Fortress and Opera House are among other noteworthy sites within walking distance of one another. For a celebratory night out with views, book a table for two at Festningen, a top notch Norwegian culinary destination located within the grounds of the medieval Akershus Fortress.

While Oslo will undoubtedly satisfy the urban explorer in you, Bergen will have you spotting marine life, identifying mountain peaks on the horizon and perhaps even paddling the fjords yourself. Whether you choose to take the Bergen Railway or a flight, your first glimpse of this waterfront metropolis will be unforgettable; the city’s colorful harbor homes are highlighted by the stillness of the water and the green mountains surrounding them. From Bergen you’ll have the opportunity to book fjord tours, take on solitary hikes and get out on the water yourself. Mount Ulriken is one of the city’s most accessible hikes, reachable by cable car. Part of a large network of wooded trails, the hike leads you to a lookout with expansive views.

There are a number of guided boat tours available from Bergen, all of which can be booked online in advance. Options range from two hour jaunts with views of the Bergen cityscape to 13- hour excursions that incorporate multiple fjords and even a glacier. This fjord cruise from Bergen’s fish market to Mostraumen is another great average- length option that will take you underneath rushing waterfalls, past seal- friendly beaches, into the heart of the fjord, and back to Bergen in time for dinner.

If you’re craving a more direct experience, try kayaking, canoeing, or rafting on Bergen’s pristine waterways with a local rental company. Choose a roundtrip package that includes transportation, equipment rentals and hours of firsthand water fun, and spend all day enjoying the outdoors. This seasonal tour, for example, includes a roundtrip train ride, a journey by bike, a fjord safari and kayaking along the Aurlandsfjord.